Support for Professional Artists up to 30 Years of Age

In late 2016 the Linhart Foundation announced an open competition for secondary-school, college and academy-level art students and young designers up to age 30, for a new design of the Foundation´s current logo, marking 30 years of its existence. The competition was won by an entry presented by Daniel Suška.

The new logo, along with the whole visual identity presentation, symbolizes in a condensed form the Foundation´s three decades of existence. The new logo and its entire complementary graphic charter has temporarily replaced the standard one, and will continue to be used by the Foundation through the rest of the year 2017, a period which will be witnessing a series of events marking the Foundation´s thirty years.

Daniel Suška (b. 1988) studied with Ladislav Sutnar at the Faculty of Design, University of Western Bohemia in Plzeň, and subsequently  at the Studio of Illustration and Graphic Art, Academy of Arts, Architecture and Design in Prague. He furthered his training during several study visits in the USA. He currently works as a lecturer in art media and printmaking with the not-for-profit organization Bubec o.p.s. His output has been influenced by the early experience of residencies at the Vermont Studio Center and at McKreddel Architects.

The Linhart Foundation has sponsored the launch of a regular series of evening programmes bringing into life so far unrealized film scripts. The series, named CineCabaret, has newly relocated from the Školská 28 Communication Space, its home during the first half-year of its current season, to NoD Theatre.

Filmmaker Natálie Císařovská and student of Screenwriting and Dramaturgy at the Prague Film Academy (FAMU) Vojtěch Bohuslav initiated in 2016 a regular series of evening programmes named CineCabaret, with the aims of creating a common working platform for script writers, filmmakers and actors, and introducing works of young script writers. The idea won the support of script writer and long-time teacher of screenwriting and dramaturgy at FAMU, Petr Jarchovský.

“This idea was born at a time when I was organizing a series of projections of movies by young filmmakers. I then felt an urge to acquaint the audience also with works produced by screenwriters, that is, with ´movies on paper´, as you might call them. While readings of literary texts by their authors are common, the same practice would have appeared ill-suited for film scripts,” says filmmaker Natálie Císařovská about the inception of CineCabaret. In its present form, CineCabaret consists in staged readings of film scripts which have not yet made it to the screen.

Thanks to the involvement of live actors who impersonate individual characters, the texts turn to “flesh” on stage, enabling the audience to get an idea of what a given film might actually look like. Inevitably, these are always mere sketches, and yet they do make it possible to outline the atmosphere of a particular screen story, putting to test the impact of its various scenes and the credibility of its dialogues once they are actually spoken by actors. In the long run, the project aims at setting up a multidisciplinary collaborative platform which could eventually lead to collective work on a real movie.

“The concept hatched by the creative tandem of Natálie Císařovská and Vojtěch Bohuslav achieves a spontaneous interaction between two of FAMU´s creative departments, something that has been continuously and for much too long fruitlessly called for. The form the two of them have chosen is interesting and inspiring, and corresponds with the needs of both the Department of Film Direction, and the Department of Screenwriting and Dramaturgy,” is Petr Jarchovský´s comment on the idea of staging film scripts. 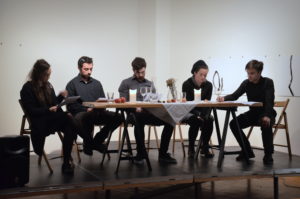